THE CITY OF MELAKA 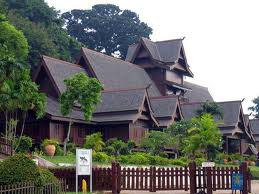 Is this a replica of the palace of Malacca meets the original architecture?

This time I will show you an article on the construction of the glory of Malacca. The bulk of this sketch has not been published by any party in our country because it can be said to be fresh from a primary source obtained from the Netherlands and Portugal. So you lucky to be looked at here. But this is only a small portion of the many sketches that successfully brought home by the researcher team of the University. Hopefully this article I thought we could open the box with a wider civilization of the Malay race in the past. 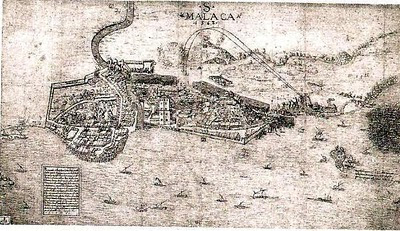 Sketches showing the city of Malacca at the time of Portuguese colonial rule. Sketches made to record the attack on the Fleet Aceh Darussalam during the siege to the city for about a year. In this sketch there appears a thrower of weapons used by the military Acheh.

Actually, when an Italian explorer named Ludovico Vertema visited Melaka between the years 1506 to 1510, the Portuguese often sent spies into the personal lives of Malacca to find information on the progress of trade, society and the state of Malacca. The important information carried by the Portuguese who came to Malacca in 1506 and 1508 was about the defense strategy of Malacca. Some of the sketches on the form and building cities, palaces and the position of the port city of Melaka successfully recorded. Among these sketches suggest a city wall and gates Melaka strong and built from local materials such as laterite stone. Construction materials is already widely available in Singapore. Both of Jorge Mello traveler who came in 1507, and Jorge De Aguilar came in 1508, has been sending information to a government historian of Joan De Barros Portugal.

From a sketch made, it proves the technology at the time of the Malays. Physical development and infrastructure, Singapore was a security feature robust and comparable to the cities in other Asian countries. In this case, the possibility of getting government Malacca Gujarati labor of people who are famous not only as traders but also as a craftsman builder of houses and buildings. It also reflects the existence of the spirit of close cooperation between the artisans Malay Muslims in Singapore and India in terms of urban and port development pentadbiranya according to Islamic law.

The information obtained from a sketch published in the Netherlands in 1508 also showed that the gateway to the city of Melaka is now actually not from the original Portuguese building materials. Based on a sketch found through research that was done, found the original construction of the Malacca Portuguese destroyed have been replaced and modified by the Portuguese architecture. The same architecture is seen in Goa, Macao and Ternate. This information is quite proud of the Malay Archipelago in particular and in general because of this sketch a proof of the civilization of Malacca at that time. Means that the sketch represents how the ability of the Malays exhibit the ability to race and pride of his country on par with other nations. In this case, the information recorded in the history of the Malay Hikayat Hang Tuah and able to record the achievement of Malay culture and civilization at the time.

Sketches of Portuguese also record the events that occurred between the wars with the Portuguese fleet of Malacca. From the sketch shown that the cannons from the ship to destroy the Portuguese strongholds of Malacca and the defense of the ships owned by a Muslim merchant. In the sketches were also seen dikejauhan buildings in the port city of Malacca and Singapore. It is clear from the sketch there is a banggunan a dome and minarets of the mosques of Malacca is likely or even castles.There are also many other buildings that line up the look of stone or concrete and more than two floors, this building was probably a palace of the sultan or a building in the complex populous port city of Melaka. 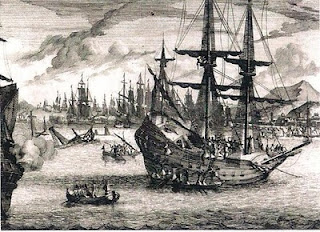 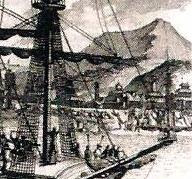 If you all look exactly the sketch attack the Portuguese fleet, you will be able to see from a distance at the port of Malacca series of large buildings, multi-level and also vaulted and has a few towers. Could this be a palace or mosque Singapore real?

Melaka event of war have also recorded with sketches were made by the Portuguese.The sketch shows the strategy of the Portuguese attack on the city of Malacca and Singapore as well as how those strategies to defend their town ranks of warriors and the warriors show even a war elephant. In this context, a form of carriage device strapped to the elephants and the captain-commander issued to carry out attacks against the Portuguese troops who are ready to face the attacks of Malacca. These sketches also show how different attack strategies used by the Portuguese and the people of Malacca. The Portuguese seem to use tactics of attack, while the Malays are more defensive. Based on these sketches, we can see the weapons used by both sides.Portuguese term used lebing commonly used in Europe, while the Malays use a spear or spear is shorter. What is interesting is to look Melaka city wall has been built with local materials such as bricks and laterite. The wall design also shows the structure of the building which is equipped with reconnaissance places at certain angles. While the architecture in the city seems Malay houses are owned by the administrator and the merchant. 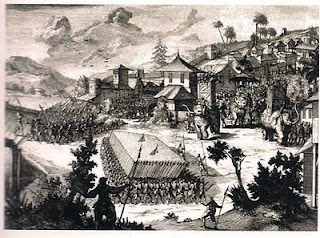 Sketch shows the military events of the Portuguese attack on the city of Malacca. This sketch is the first time we discovered by historians. So far most of the sketches that we find there is a picture painter. But the sketch is believed to be contemporaneous with the events of the actual sketches. Therefore we can assume that this is a picture of a sketch artist at a time when those who are.

There is another sketch secured by my professor and peprustakaan archives in Lisbon and the Netherlands. Visit of representatives of the Portuguese traders in 1509 Lopez De Sequeiraa to Melaka city traditionally celebrated the greatness of VIPs from outside the state have drawn. In this sketch he was honored to ride an elephant who became one of the Malay kingdom of Transportation official. In the march towards the palace of Malacca, the Portuguese delegation accompanied De Sequera. This sketch shows the architecture of the city walls and gates of the palace of the sultan of Malacca is made of building materials is strong. Based on these sketches, the wall of the building materials are of local white stone. While the Palace of the Sultan of Malacca is also made of the same materials. Therefore, the court found Melaka in Malacca is now not meet the original architecture of the palace is made almost entirely of bricks. The parade attracted a surprising number of people of Malacca to the Portuguese arrival.In the sketch tersenut also shows the guards and the warlords outside the gates of Malacca carry spears and bows are very large. They also wear more than par lutu and the other wrapped around the waist with a pattern. Do not change their clothes as clothes Roman times. Istana Melaka has sketched a balcony or berandah overlooking the port and the sultan was seen sitting on the Balcony while awaiting the arrival ofthe Portuguese envoy with the ministers and warlords. The castle was also stratified according to the word in Malay History. 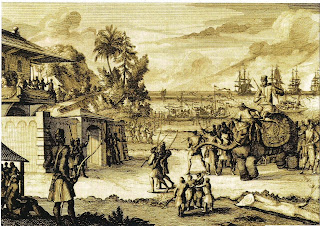 Sketches showing the procession to the Istana Melaka Portuguese envoys witnessed by the people of Malacca.Interestingly the population melaka are surprised to see White Bengalis are also listed in Malay History. More attention is building the Palace of Sultan of Malacca.

But the all-reader, now has missed maybe a quarter of the questions about the greatness of the city of Melaka is often speculated in the records of foreign travelers and the. We can also look in more detail how to build it fast and Town of Malacca and the defense system of the sketches that I show. Hopefully it will benefit you to all members. Wallah hu knows best.

Email ThisBlogThis!Share to TwitterShare to FacebookShare to Pinterest
Labels: Melaka 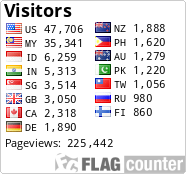